The debut of Wolverine and the new X-Men. 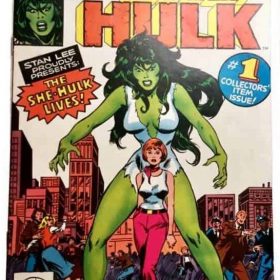 Some of the Bronze Age Comics we are looking to buy

During the Bronze Age of comics, the superhero genre continued to dominate as characters tackled real world issues relevant to the times. Marvel’s most famous artist, Jack Kirby, left to DC Comics in 1970 and created The Fourth World, which introduced Darkseid and others to the DC Universe. Wolverine debuted in the final panel of Incredible Hulk #180 before making his 1st full appearance in Incredible Hulk #181 (November of 1974). Shortly after, the new X-Men roster (Wolverine, Cyclops, Storm, Nightcrawler, Thunderbird and Colossus) debuted in Giant-Size X-Men #1 in the Summer of 1975.

Star Wars characters made the transition from the big screen over to comic books, with the 35-cent price variant copy of Star Wars #1 becoming the most valuable comic book of the Bronze Age.