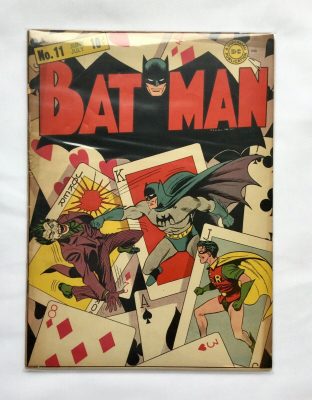 The Golden Age of COmics

The Golden Age of comics began with Superman’s first appearance in Action Comics #1, which was released in June of 1938. DC Comics followed up with Batman, Robin, Wonder Woman, The Flash, Green Lantern and more. Timely Comics (who later became Marvel) joined the genre with superheroes of their own: The Human Torch, Sub-Mariner, Captain America and Bucky Barnes (who later became The Winter Soldier). Fawcett Publications created Captain Marvel  (not to be confused with Marvel Comics’ superheroine of the same name!), who collectors today know as Shazam, debuting in Whiz Comics #2 (#1) in February of 1940.

During World War II, comic book superheroes joined the Allies in their fight against the Axis powers; patriotic front covers from this time period are of particular interest to collectors. After the war, interest in the superhero genre began to decline and would not see a true resurgence until the mid-1950s, at the dawn of what came to be known as the Silver Age of comics.