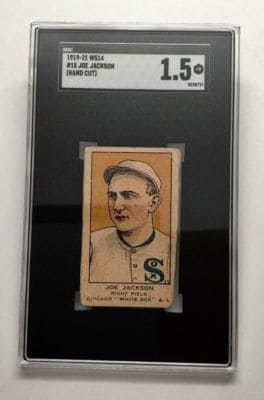 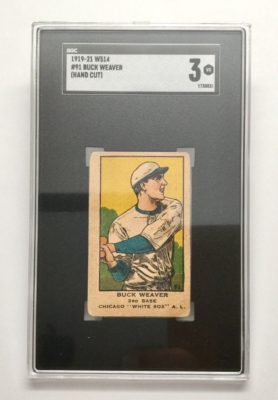 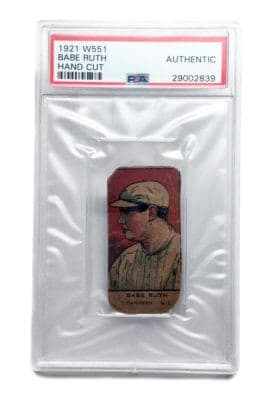 Back before baseball cards were packaged with gum and sold in wax wrappers, they were sold in strips of 5 or 10 from the late teens through the late 20’s.  They were then hand cut by the purchaser.  They resembled the T206 baseball cards.  The cigarette cards however were cut by the manufacturer and then placed into packs.  Also, the backs of strip cards were printed blank while the cigarette cards featured an advertisement, reflecting the tobacco company which it was printed by.

Most strip cards do not achieve the value that they truly deserve.  But, looking at the W514 baseball “strip” card set one particular player sticks out as the ultimate key: “Shoeless” Joe Jackson.  The most interesting fact about this particular Joe Jackson card was that it was printed from 1919-1921.

In 1919, the Chicago White Sox (dubbed the “Black Sox”) threw the world series.  Only 50 different cards were sold during Jackson’s playing career.  However, this was the only one printed and sold during 1919.  This has great historical significance as it was almost the death of baseball.  We proudly offered this example, a 1.5 (Fair) graded and slabbed by SGC (Serious Grading Culture).  The last example prior to ours, sold at auction for $9,826 by the Mile High Card Company back in June of 2013 according to PSA’s (Professional Sports Authenticators) “Auction Prices Realized” page.